Handheld lasers have become a standard device in cosmetic surgery and medical spa applications. Handheld cosmetic lasers offer a wide range cosmetic benefits with minimal damage to the body and reduced patient recovery time. Even though thousands of microscopic laser beams make pinpoint contact with the skin, the process does not affect the surrounding tissue. However, lasers generate a significant amount of heat that must be quickly and efficiently dissipated to protect the patient, and the laser electronics. Thermoelectric coolers deliver active cooling to move heat more efficiently and reliably compared to other temperature control solutions.

Surgeons have traditionally used handheld lasers in medical procedures for ultra-precise tissue incisions, ablation or coagulation. These virtually bloodless procedures minimize thermal damage to the surrounding tissue and decrease recovery time. These benefits have led to handheld lasers being used in a variety of cosmetic procedures including skin care, fat reduction, hair removal and tattoo removal. Handheld cosmetic laser systems are simple and user-friendly with pre-set operating parameters that reliably produce both superficial and deep skin treatment with excellent precision.

Cosmetic laser engines consist of a high-efficiency laser, heat-spreader, convection cooling device, and optical lensing element, all contained within a radial heatsink shell. The laser engine is constructed to disperse as much heat as possible to allow for longer operating times at maximum power.

Many more advanced handheld cosmetic lasers provide direct cooling to the skin as the laser treats the patient. The cooling capability requires a separate cooling mechanism than what is used for cooling the laser.

Waste heat significantly affects the performance of a laser and must be efficiently dissipated away from the sensitive laser components. Heat generated by the handheld laser can range from as little as 5 Watts to more than 200 Watts depending on the application. For optimal performance, the laser requires a stable operating temperature of 20°C ± 0.5°C, while ambient temperature may fluctuate in room temperature environment.

The thermal stability is particularly challenging because of the form factor restrictions of the cosmetic handheld laser. Miniaturization of handheld lasers has led engineers to pack more electronics into a smaller footprint. More electronics increases functionality, like combining skin cooling with skin treatment, however, it also increases the complexity of the thermal solution. As a result, the thermal components must provide advanced thermal control and route heat dissipation thru tight geometric space constraints. As this is a handheld device, components must also be able to withstand shock and vibration to ensure low maintenance and long-life operation. To further reduce operating costs, thermal management solutions with low power operation are preferred.

In addition to cooling the laser, it is also important to cool the patient’s superficial layers of the skin to protect the epidermis and prevent thermal injury. Cooling can be achieved by cold air convection, contact cooling or cryogen spray (dynamic) cooling. Contact cooling is considered the ideal method of cooling, More sophisticated cosmetic lasers feature an imbedded contact cooling device to reduce pain and erythema to increase patient comfort during the procedure.

Thermoelectric coolers are composed of two ceramic substrates that serve as electrically insulating materials and house P-type and N-type semiconductor elements. Heat is absorbed at the cold junction by electrons as they pass from a low-energy level in the P-type element onto a higher energy level in the N-type element. At the hot junction, energy is expelled to a thermal sink as electrons move from a high-energy element to a lower-energy element.

Themoelectric coolers can also be embedded into the handpiece of a cosmetic laser to cool the patient’s skin and prevent thermal injury. The thermoelectric devices cool sapphire metal or glass plates integrated into the end of the handpiece. Sapphire tip cooling, or chill tip cooling, delivers active cooling throughout the cosmetic procedure (pre-, during- and post-cooling).

Laird Thermal Systems’ Ceramic Plate (CP) Series is a rugged, compact thermoelectric cooler designed for higher current and large heat-pumping applications like handheld cosmetic lasers. Placed next to the laser, the CP Series direct-to-air configuration offers a maximum cooling power of up to 125 Watts with a temperature difference (ΔT) of 67°C in a small form factor of 62 mm x 62 mm x 4.6 mm or smaller. The CP Series is available in a wide range of heat pumping capacities, geometric shapes, and input power ranges to meet handheld laser requirements.

The UltraTEC Series thermoelectric cooler has a heat pumping capacity up to 341 watts, which is ideal for ablative cosmetic lasers. The cooler is assembled with a large number of

semiconductor couples to achieve a higher heat pumping capacity than standard single stage TEMs. The UltraTEC Series thermoelectric cooler not only offers high heat pump density, but precise temperature control to within ± 0.01°C. With a Q Max @ temperature rating of 341W @ 25°C, the UltraTEC ensures the laser system will not overheat.

Thermoelectric coolers provide superior temperature stabilization to maintain peak performance of a handheld medical cosmetic laser. Through the Peltier effect, thermoelectric coolers deliver solid-state operation, low maintenance, and long service life. Thermoelectrics also make an excellent thermal management solution due to compact size no vibration and low total cost of ownership. This cannot be accomplished by any other means without a complex heating and cooling system.

More information on the CP Series can be found by visiting
https://www.lairdthermal.com/products/product-series/cp-series

More information on the UltraTEC Series can be found at
https://www.lairdthermal.com/products/product-series/ultratec-series 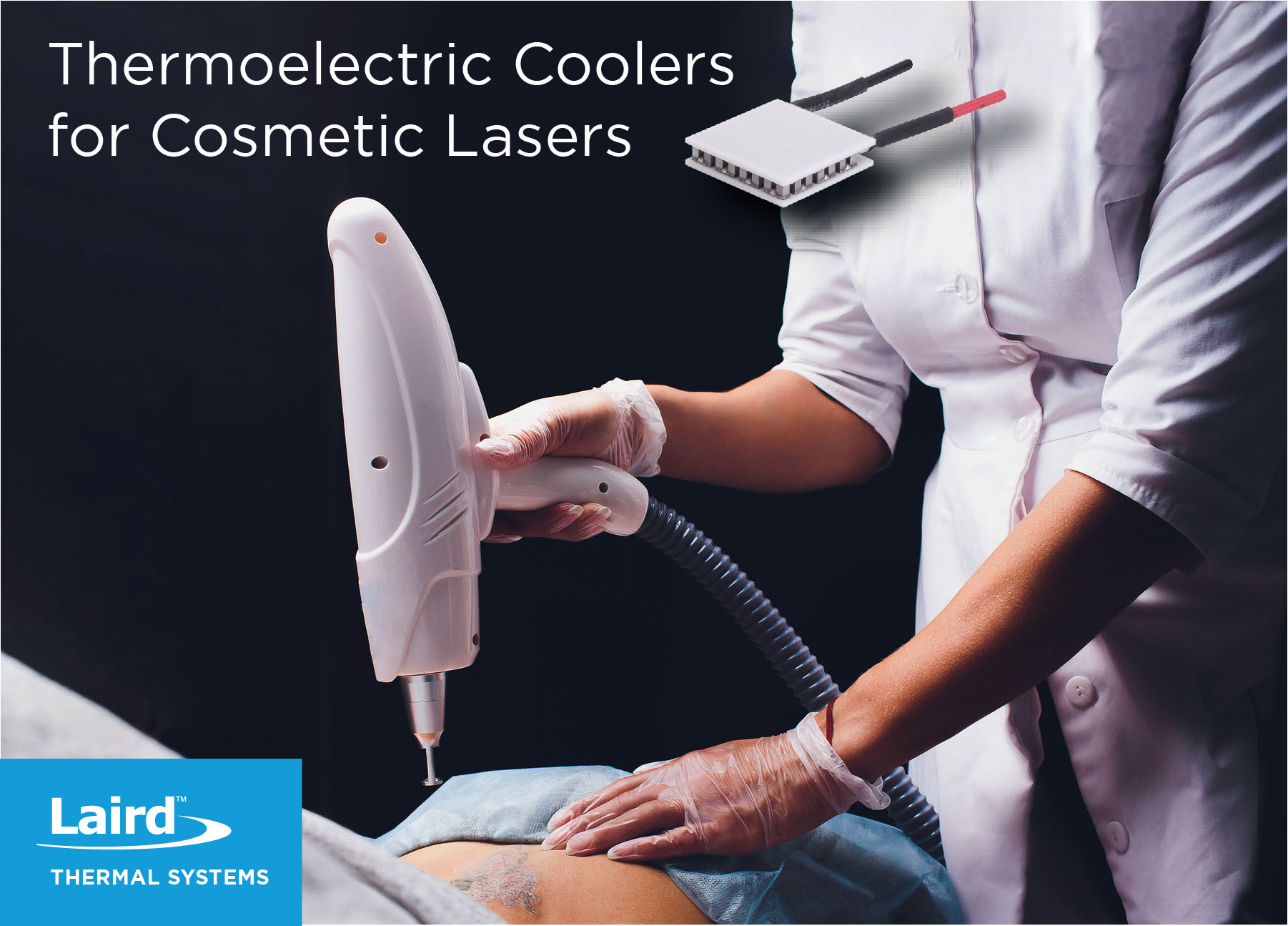