Heating and Cooling of Incubator Chambers

Incubators, used for cell and tissue cultivation in hospital and laboratory settings, grow and maintain cell and tissue samples under controlled conditions for hours, weeks, or even months. They create the ideal environment for cell and tissue sample growth by maintaining optimum levels for temperature, humidity, carbon dioxide, and oxygen. Precision control of these factors enables research and experimental work in industries where cell culture is vital, such as zoology, microbiology, pharmaceutical research, food science, and cosmetics.

Accurate and precise control of temperature is especially important for cell growth. Excursions above and below the optimum mammalian body temperature of 37°C, even by as little as 6°C, negatively impact cell health. If too cold, growth slows, sometimes permanently; if too hot, sensitive proteins begin to denature.

Control of temperature, humidity, carbon dioxide, and oxygen levels must be maintained in the incubators for proper cell culture to occur. The heat load requirements can range from 30 to more than 400 Watts based on chamber size. For CO2 incubators, relative humidity levels of 95 to 98 percent and specified CO2 concentrations ranging from 0.3 to 19.9 percent also must be maintained. 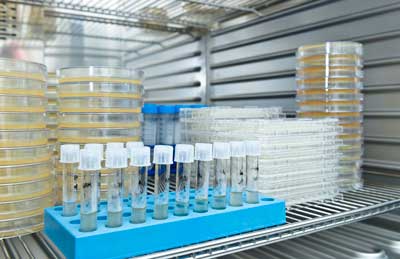 Dependent on the cabinet size the chamber will require a specific amount of cooling capacity to reach worst case cool down temperature. The higher the cooling capacity, the larger the cooling unit needs to be. However, the thermal solution must include an efficient heat exchanger with a thin profile that can operate in a confined space to maximize chamber volume. Therefore, thermal control units in space constrained incubators need to have high performance heat exchangers in order to reach the higher cooling capacity requirements.

Another challenge is ensuring consistent airflow throughout the chamber. Incubators feature fans to circulate air within the chamber. To minimize variability between samples they use air ducted shrouds to distribute air evenly throughout chamber. However, operating in a high humidity environment requires fans and other components to be protected from moisture that can cause corrosion and quickly degrade the performance of mechanical components. It can be difficult, however, to balance the high humidity levels needed for proper operation of the incubator with condensation forming inside the unit. Features such as gasket sealing, insulation, potting and routing of condensation can limit exposure to moisture degradation.

From an operational standpoint, dust environment in labs may be a concern. Depending on lab activity around where the incubator is stationed, dust can accumulate over time in the heat exchanger assembly and increase the thermal resistance. This will reduce performance and make the thermoelectric assembly work harder to achieve the same set point temperature. To maintain good thermal performance over time, it is ideal to keep air inlet away from the floor and consider using an air filter to capture dust from incoming air. The incubator design also must account for biohazard safety protocols by incorporating easy-to-clean and sterilize interiors and shelves. This may require the cooling unit to withstand elevated temperatures during the sterilization process.

Typically, in a CO2 incubator, an air or water jacket maintains an even temperature. Since water has a much greater specific heat than air, water temperature changes much more slowly, thereby regulating the temperature inside the lab incubator. The water jacket, a water-filled casing surrounding the incubator, has inlet and outlet ports which circulate water through the chamber walls and to an external heating and/or cooling device. The water exchanges heat with the inner chamber via natural convection and provides a fairly uniform interior temperature and thermal buffer against outside air. The down side is water jackets may leak; and since they contain a significant volume of water, they are very heavy and usually need to be emptied before moving. After moving, the refill and restart process requires about 24 hours to return to a stable operating temperature, leading to significant downtime.

Using a similar casing to the water design, an electric coil or compressor-based system heats air within the jacket, which radiates heat directly to the cell cultures. Some air-jacketed models rely strictly on natural convection to distribute heat evenly inside the chamber, while others add fans. Forced convection, however, increases evaporation from the cultures, desiccating small samples, even when adding a humidity pan. In addition, compressor-based air jackets add unwanted vibration and noise to the lab environment, while generally occupying a large amount of space.

Environmentally friendly thermoelectric temperature control systems offer accurate and precise heating and cooling inside the chamber in a compact form factor. There are many advantages of using thermoelectrics for thermal management including cooling or heating modes, precise temperature control and rapid cool-down or heat-up ramp rates. They also keep samples safe from temperature changes. All of this is accomplished without the use of any refrigerants—natural or synthetic.

Thermoelectric cooler assemblies are compact units that allow design engineers to start with a basic set of building blocks mating fans and thermoelectric coolers to heat exchangers. They have a cooling capacity spectrum ranging from 10 to 400 Watts and are available in convection, conduction, or liquid heat transfer mechanisms.

Below is an illustration on how a typical thermoelectric heater/cooler assembly is used to cool or heat an incubator chamber. The thermoelectric unit is mounted between two air heat exchangers. In cooling mode, air inside the chamber circulates across the cold side air heat sink and gets cold. The thermoelectric cooler absorbs the heat and pumps it out to the hot side heat sink. The hot side air heat exchanger circulates air to the ambient environment. In heating mode, the opposite occurs. To limit heat transfer to the ambient environment, the hot side fan is typically off in heating mode. 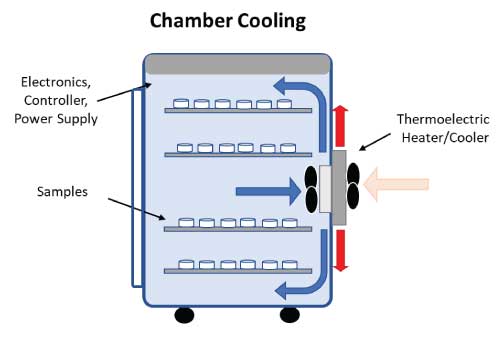 Another option is any of the SuperCool thermoelectric cooler assembly series outfitted with a SR-54 or PR-59 temperature controller. All of the SuperCool series feature a high-performance heatsink design, incorporating heat pipes to improve heat dissipation and fan shroud assembly. Lowering the thermal resistance of the heat exchanger increases the heat-pumping ability, so these thermoelectric cooler assemblies can operate at a higher coefficient of performance (COP), reducing power consumption relative to competing technologies. All this capability is packed into a compact form factor.

Combining a SuperCool Series thermoelectric cooler assembly with a temperature controller offers significant design advantages over traditional technologies. The SR-54 programmable microcontroller provides thermal stability to within ±0.13°C of the set point in both heating and cooling modes. This controller allows the incubator to reach the set-point temperature quickly without overshooting. Its monitoring capabilities track potential issues, including problematic fans, thermoelectric coolers, and thermostats for quick fault troubleshooting, maximizing incubator uptime. Variable fan speed reduces operational noise, since the fans only run on high speed during the initial temperature ramp and then lower their speed when the incubator temperature has reached steady-state.

Thermal Systems can partner closely with customers across the entire product development lifecycle to reduce risk and accelerate time to market. Depending on the customer needs they can provide various levels of vertical integration. Some customers purchase Laird Thermal Systems’ thermoelectric cooler assemblies and build their own custom solutions while other design their own solutions and use Laird Thermal Systems as a contract manufacturer to build them. Still, others prefer the entire solution, from design to manufacturing. 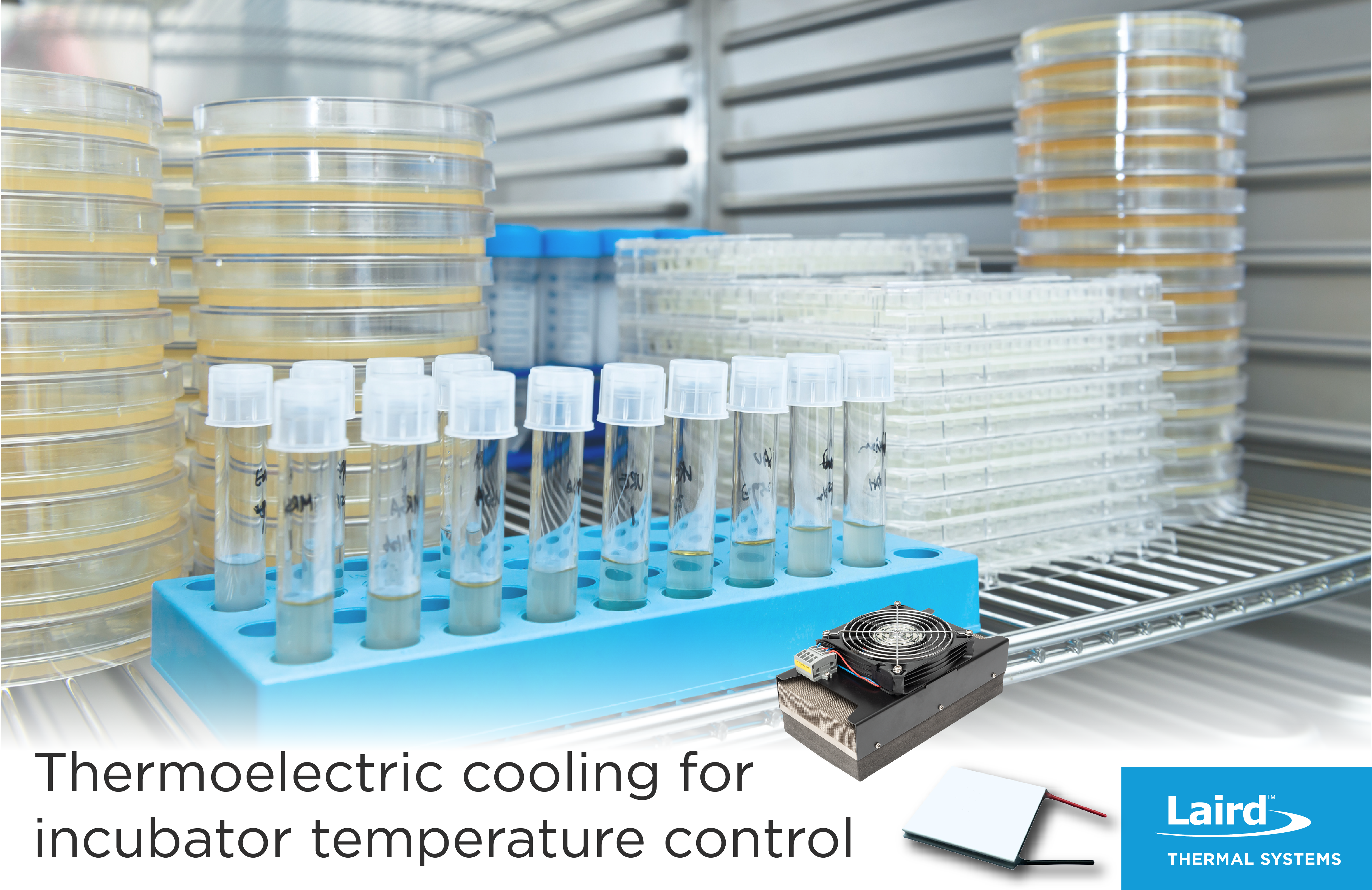